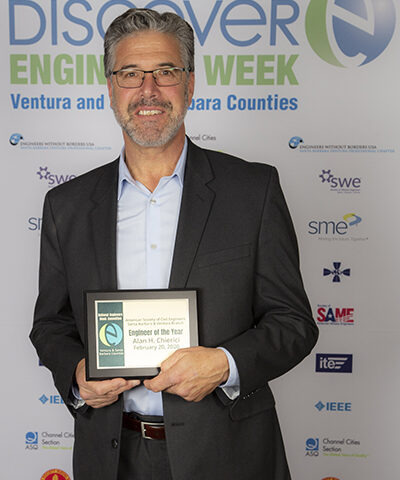 We are excited to announce that on February 20th, our Vice President and Construction Engineering Managing Partner, Alan H. Chierici, was selected as ASCE’s Engineer of the Year and was on the team that was selected for Project of the Year at the Ventura & Santa Barbara Chapters’ National Engineers Week Awards Banquet, held at the Poinsettia Pavilion in Ventura, CA.

The Mission Street Rehabilitation Project, for which Alan and the team at the City of Santa Barbara were nominated, consisted of extensive rehabilitation of one of the City’s most traveled arterial streets, Mission Street between Highway 101 and State Street. It included replacing failing traffic signal conduits, improving pedestrian accessibility by upgrading access ramps and repairing sidewalks, repairing curbs and gutters, repaving the roadway and planting new street trees. Complex phasing was implemented to minimize disruptions to the public and local businesses. The City dubbed the project “Mission Possible,” and led a campaign that effectively coordinated and engaged with community members, residents, businesses and visitors alike. As a result, there were very few complaints over the duration of the three-month construction project which was successfully completed on time and within budget.

Together with the Santa Barbara Unified School District, Kruger Bensen Ziemer Architects, Inc. and other agencies, we continue design and construction preparation services for the renovation of Peabody Stadium at Santa Barbara High School.

To read more information on construction updates, please visit the Noozhawk website here. For a very informative article on some local donors for this project and to see how you can help, please see the Noozhawk article here.